On Sunday, November 9, 1975, two days before he dismissed Gough Whitlam, the Governor-General met with the Chief Justice of the High Court, Sir Garfield Barwick.

On November 10, Barwick, a former Liberal Party minister under Menzies, tendered this advice to Kerr about his constitutional powers.

In response to Your Excellency’s invitation I attended this day at Admiralty House. In our conversations I indicated that I considered myself, as Chief Justice of Australia, free, on Your Excellency’s request, to offer you legal advice as to Your Excellency’s constitutional rights and duties in relation to an existing situation which, of its nature, was unlikely to come before the Court. We both clearly understood that I was not in any way concerned with matters of a purely political kind, or with any political consequences of the advice I might give.

In response to Your Excellency’s request for my legal advice as to whether a course on which you had determined was consistent with your constitutional authority on duty, I respectfully offer the following.

The Constitution of Australia is a federal Constitution which embodies the principle of Ministerial responsibility. The Parliament consists of two Houses, the House of Representatives and the Senate, each popularly elected, and each with the same legislative power, with the one exception that the Senate may not originate nor amend a money bill.

Two relevant Constitutional consequences flow from the structure of the Parliament. First, the Senate has constitutional power to refuse to pass a money bill; it has power to refuse supply to the Government of the day. Secondly, a Prime Minister who cannot ensure supply to the Crown, including funds for carrying on the ordinary services of Government, must either advise a general election (of a kind which the constitutional situation may then allow) or resign. If, being unable to secure supply, he refuses to take either course, Your Excellency has constitutional authority to withdraw his Commission as Prime Minister.

There is no analogy in respect of a Prime Minister’s duty between the situation of the Parliament under the federal Constitution of Australia and the relationship between the House of Commons, a popularly elected body, and the House of Lords, an non-elected body, in the unitary form of Government functioning in the United Kingdom. Under that system, a Government having the confidence of the House of Commons can secure supply, despite a recalcitrant House of Lords. But it is otherwise under our federal Constitution. The Government having the confidence of the House of Representatives but not that of the Senate, both elected Houses, cannot secure supply to the Crown.

In the event that, conformably to this advice, the Prime Minister ceases to retain his Commission, Your Excellency’s constitutional authority and duty would be to invite the Leader of the Opposition, if he can undertake to secure supply, to form a caretaker government (i.e. one which makes no appointments or initiates any policies) pending a general election, whether of the House of Representatives, or of both Houses of the Parliament, as that Government may advise.

Accordingly, my opinion is that, if Your Excellency is satisfied in the current situation that the present Government is unable to secure supply, the course upon which Your Excellency has determined is consistent with your constitutional authority and duty. 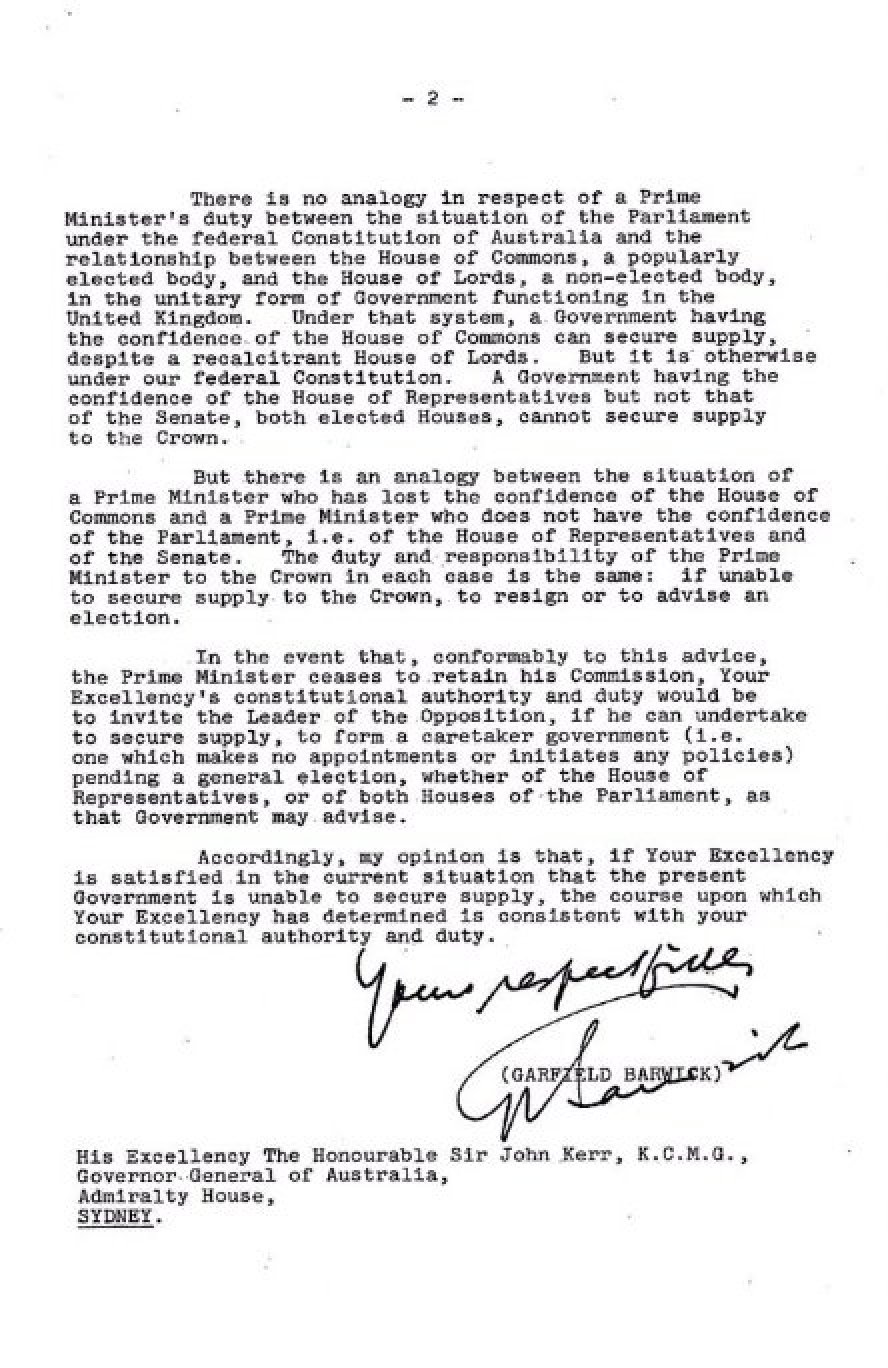