How The Queen Heard About Whitlam’s Dismissal

The Queen was told about Gough Whitlam’s dismissal when she woke at 8am on the morning of November 11 in Buckingham Palace.

At this stage it was 7pm in Australia, the Parliament had been dissolved and an election set in train.

The Queen’s assistant private secretary at the time, William Heseltine, heard the news in a telephone call from the Governor-General’s Official Secretary, David Smith, at about 2am London time. This suggests Smith rang the palace almost immediately after Kerr dismissed Whitlam.

Details of these events have been published in an article about now Sir William Heseltine in The West Australian.

Text of article that first appeared in The West Australian.

No wake-up call for Queen over dismissal

WA-born Sir William Heseltine, who was a member of the Queen’s staff for 27 years, said the Queen had closely followed events during the constitutional crisis of November 1975 but Sir John had not told her of his intentions and had not sought her advice.

END_OF_DOCUMENT_TOKEN_TO_BE_REPLACED

At 4.45pm on November 11, 1975, nearly four hours after Whitlam’s dismissal, the Governor-General’s Official Secretary, David Smith, read this proclamation on the steps of Parliament House.

This audio clip of Smith and Whitlam is the first ever broadcast by the ABC shortly after 5pm on November 11. It starts at the end of Smith’s reading of the proclamation and includes Whitlam’s famous words about Kerr and Fraser. 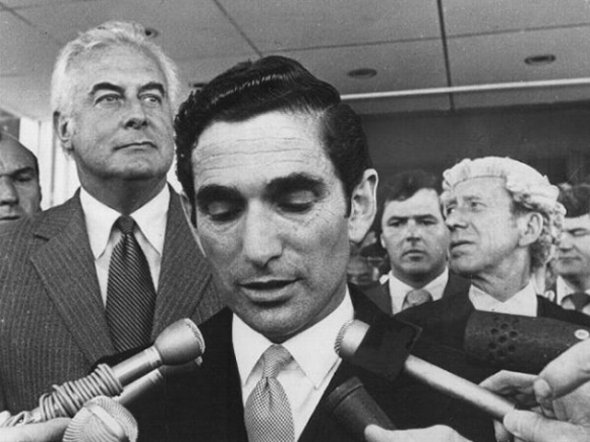 PROCLAMATION
By His Excellency, the
Governor-General of Australia

END_OF_DOCUMENT_TOKEN_TO_BE_REPLACED

The Twenty-Eighth Parliament was dissolved after only 18 months as a result of the controversy over the appointment of the DLP Senator Vince Gair as Australian Ambassador to Ireland.

The subsequent announcement by the Federal Opposition Leader, Bill Snedden, that the coalition parties would block the goverment’s Supply Bills in the Senate caused Prime Minister Gough Whitlam to respond by calling a double dissolution election for May 18, 1974.

Governor-General’s Proclamation dissolving both Houses of Parliament on April 11, 1974.

PROCLAMATION
By PAUL HASLUCK, the
Governor-General of Australia